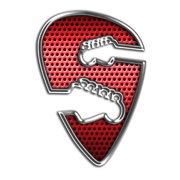 When you listen to music, you hear the vocal; then you hear the melody or vice versa but it's not until you spend a bit of time with a new song that you actually start listening to what the words are.  To what the artist is saying.  It's at that point that you get to know that person a little bit more and you are able to connect with them on a deeper level.  When the song is written by a songwriter, it's not the artist I connect with but the lyricist.  That songwriter can give that track to a million different people and they are all going to put their own spin on it, but it's still his/her lyrics they are singing.  It's his emotion they are emoting.  So as great as it's sung without the words to sing there isn't anything there.

Today, I was fortunate enough to be introduced to a new artist.  Someone that plays with words and puts them together in such a fashion that they are able to make me feel things.  Whether those things are joyous or maudlin; spirited or melancholy - it's the person first putting pen to paper that gets the ball rolling and today, I got to know a little bit about an incredible man from Codicote, Hertfordshire (that's in England btw).  Sam Lewis is a selfless man because if you listen to the cover songs on his Youtube or his SoundCloud, he has the ability to shine as a vocalist all on his own.  He has several , but for whatever reason - he chooses to stay in the background.

The songs featured in his "Songwriter/Producer" set on SoundCloud are crazy.  Each of the three are so great.  I am just floored at his talent.  They are all so different and unique and show off different facets of his personality.  They have to because each artist puts a piece of them in the songs.

The Simple Things
Kai Addams kicks off the set with a power pop track with one of the most solid productions I think I've ever heard.  Every bit of it fits together perfectly and makes me want to blast it with the top down on a sunny summer afternoon.  The only thing that would make it better would be a remix featuring Tinchy Strider or Dizzie Rascal in the middle eight.  Showing off a bit of the hard and soft of a track that already has a killer amount of edge to it.  It's not Britney or Christina.  It's something totally new.  It's more Sophie Ellis-Bextor but with a bit of smoky-ness added just for good nature.

Ships
"Can we make it til morning or are we ships in the night"
This song is criminal.  The bassline and the guitar are slinky and sexy and the harmonies are spot on.  The overall level of funk on this song is bananas.  You just sink into it and groove.  I don't know what it is about the completed package but Alex Bay on vocal duties delivers this song like no one else could.  Listen to the words though. Tell me they aren't inspired.

Work, Work, Work
Damnit if this song doesn't get you off your ass and moving, nothing will.  Sophia-Marie on vocals has enough energy and sugary sweetness to make this song something that you can't help smile and have a great time to.  Tweens everywhere should be blasting this at the top of their speakers and doing the jitterbug or the jive.  How can this song not be amazing.  It is 2:53 of pure bubblegum pop realness.  It would fit right next to a 40s USO show or in the next great Disney movie.  Two thumbs energetically up in the air.

If these three songs are any indication as to what he is capable of doing, then this man is bordering on creative genius.  I can't really express how cool these tracks are.  I want to hear more from Mr. Sam Lewis. I want him to be a megastar, whether that be as a writer or a pop star because he has the talent to do both.  I want more because he is going to make a change in the industry somewhere or somehow.  I just have this feeling.

Sam on the Web