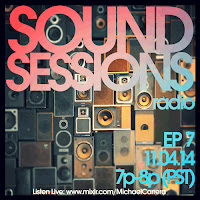 I don't often write about house music that's been put together in the format of a DJ set or a podcast or a broadcast that would happen in a bar or a club because as much as I like that music, the blog has been mostly used to disseminate music that's more traditional. Verse, chorus, verse kind of stuff. But you'll run across a set every now and then and you need to talk about it. Because sometimes it's bigger than the sum of its parts or sometimes it's just what you need to hear at that moment in time. With this track and this artist, I think it's a mix of both. And don't ever think that I don't feel this is a valid art form because this takes as much or more work than recording a song.

In most cases, the producer has to build the structure of the track and make sure that he/she has a clear enough vision to stretch for however long their set is. Now, a lot of times...these things are preprogrammed so that the dj pretty much just pushes a button on a laptop and there you go. Clubs and venues and events don't like that. So much so that many places are banning "laptop djs" from preforming.  Other times, the stuff happens on the fly with actual mixing and building the set as the artist goes. This track is one of those. This is something that the producer had in mind but as he was going, he was laying the track down a piece at a time.  This is "Sound Sessions Ep. 7" by Michael Carrera. Michael is an LA based artist, born and raised, and you can listen to the careful crafting of this track and hear how music is his life. It's put together in such a way that once you get started, there's no stopping. It lifts your spirits and just makes you feel good.

I think that's one of the things I never talk enough about dance music. The purpose of it is the same as any other music. It's there to make you feel good. To make you feel good and to connect you with the people you are sharing a dance floor with. It elevates your mood, gets your endorphins going and makes you forget everything while you're dancing. It's that artist's responsibility to make sure that you don't have a reason to stop dancing and Michael has done that here. You've got the lulls in the pace that allow you to slow down and step side to side and catch your breath before you start back at it. You spin back up on your heels and keep the grind going.  With each break, he turns it up a little more to keep you going. Then when it gets about 39 minutes in and the rap verse starts - you can't help but not move. I think he was amazingly smart by waiting this long into the set to put vocals. Sure there are some audible speaking parts earlier but this is really the first real verse in the song. You've invested into the rhythm he's created. You've given yourself to him, body and soul and now the words are pushing the beat into you more and more. You belong to him for the length of this set.

And to think that he's done this live. This is a live set where he was putting this all together on the fly. And if he can do that, you should hear what else he's done.  I get that this is a two year old track but that's another piece of magic. House music is timeless. There's nothing that's tying this to a specific time and place. You play this in a club 2 years ago - people dance. You play it 2 years from now - people dance.
at July 03, 2016