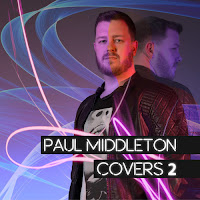 It's really cool when you're digging through the bins, as it were, and you run across a gem that you didn't know existed. About a year ago, DJ Chris Spear was asked to do a remix of a cover for Paul Middleton.  If you don't know Paul, click here but come back.  Paul is this big, beautiful bloke from England that has this amazingly earthy voice that just makes you close your eyes and sigh a deep sigh.  He recorded 2 albums, 'Covers' and 'Covers 2' and donated proceeds to cancer research. So one of the songs that he wanted to do was "Edge of Glory" by Lady Gaga and needed to have a Paul Middleton spin on it. So Chris was contacted to do this mix where everything was slowed down, stripped down, and put back together into something better than it was before.

Gaga's anthem was a bit manic compared to this slowed down version of the song. This version has a bit more longing to it. Yes, I am right here with you. I am on the Edge....but at what cost? What have I given up to stand here with you...the world against us and no where to turn. It's just you and me now and this better be worth it.  The slow melodic track that Chris has created is the driving force behind this. True, Paul's vocal take on the song is the art in the frame that Chis built but the track is even more important than a frame for a painting. One misstep in the production of the track can send everything horribly off the rails and take the whole song down with it. But the thought that was put into the choices he continues to make in his music stand the test of time. He's incredibly intelligent when it comes to tempo and speed. There's something smooth and super silky about this. Almost like silk gliding across steel springs. Something powerful right underneath but a layer of delicate beauty is right on top.


The build ups are slow and methodical. There's a calculated risk to the notes in their placement of the overall track. The tone is set right off the bat and it doesn't take you too far away from where Chris wants you to be. You're just causally sauntering through the song at an easy pace that is just easy. It's very much inline with the new breath that has been breathed into this track. It's not raucous and bawdy like the original was.  There's a bit of digital trickery on Paul's vocals (specifically on"...feel the rush") that adds his really cool metallic vibe every now any then. It's not like they've been digitally cleaned, just a bit of an automatic, robotic feel.

I really love this track and I think that it's an amazing counterpoint to what Gaga did. It's the comedown after she's run you ragged.
at July 02, 2016