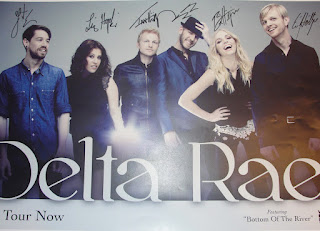 I've been to a great number of concerts in my life and it takes a helluva show to crack my Top 5 and it takes an even greater show to make it into my Top 3 and after last night's live show at 3rd and Lindsley in Nashville, Delta Rae are now in that coveted position.  It's no secret that I am a fan of this band and I have been more than anxiously waiting to see them live because even though there are dozens of YouTube videos, the experience of seeing a live show will hands down beat any prerecorded broadcast.  The concert was sponsored by Lightning 100, Nashville's Independent Radio and Yuengling.  It was part of a program that Lightning 100 does where they broadcast concerts live on Sunday nights so both Wild Feathers and Delta Rae were simulcast to radio listeners.

Brigitte DeMeyer, a local artist lit up the venue with some amazing blue eyed soul mixed with a little bit of everything.  She threw in some folk and some Alt. Country and a healthy dose of New Orleans influenced soul. She has a similar vibe as Emmylou Harris so if you are a fan of her particular brand of music then you will no doubt enjoy Brigitte.  She played for about an hour and did a helluva job showing off what she's about and what to expect from an album.  Here is a video from SXSW of her song "Say Big Poppa" and it was as amazing last night as it is in this video.  Her voice is just so full of experiences and character you want her to sit around and tell you stories all night.


Up next was one of the most dynamic groups I have ever seen.  I believe they would fit into the Americana genre with a heavy twist of Alt. Country.  Wild Feathers is a band that has a unique take one what is classified as Rock and Roll and what isn't and throws it out the window in order to make up their own rules along the way.  What struck me as most awesome about this group was that they had 3 singers (Taylor, Ricky and Joel) that all shared duties on lead vocals.  And when these guys come together their harmonies are just mind blowing.  The vocals ranged anywhere from subtle and slight to straight on rock and roll.  By the time they played "Backwoods Company", I knew I was hooked.  My only question was where did I need to throw money at to support them.  I needed to buy a CD because they are that damn good.  I found out about them yesterday and I immediately wanted to buy the record.  Their set was loud and full on and didn't stop (well until it did).  I think that with the success of bands like Drive-by Truckers, The Avett Brothers and others that fall into this genre because no one else knows where to really put them, Wild Feathers is going to do exceedingly well for themselves.  If you go to their website and sign up for their mailing list, you can get downloads of "Backwoods Company" and "The Ceiling", both songs that will just make you stop what you're doing and pay attention.  Their set was an hour and by the end of it you needed a break from just partying.  Here is a video of them doing "Hard Times" (Not from last night but another show where the person recording did a bang up job)


After a quick breakdown and reset, our headliners were introduced to thunderous applause.  They do this thing when they are all on stage together that just fills up the entire room.  They have such stage presence and they don't even have to try.  It was really cool to watch them as one vocalist would sing, the others would stand quietly with their head bowed and it almost seemed a sign of respect and reverence for their fellow singer as to not draw attention or focus from them.  When it came time to harmonize, then they would do their part and go back to just being still.  We were sitting maybe 10 feet from the stage on Ian's side and with each song in the set, we were pulled further and further into the magic that is their music.  From where I was sitting, I could watch each member (sometimes Grant disappeared behind Ian, especially when he was playing the Upright) and I can honestly say, I  have never seen a drummer play with the intensity  that Mike McKee does.  There were times that it looked like those drums owed him some money and he was gonna get it back. lol.

From the minute that Eric started singing "Morning Comes" until the last bar finished on "Hey, Hey, Hey" you were just swept up in the experience and time just seemed to stop.  I've said repeatedly by now that I am a huge fan.  And as a huge fan, I sat and sang along to every song (not loud or obnoxiously or in a karaoke style - mostly I lip synced so that I never sang over top of them in my own head).  This turned out to be an act that I would later find out that did not go unnoticed.  Ian actually told me that it was cool that I sat up front and sang along because it helped with the energy in the venue and he appreciated it. I immediately became self conscious because he actually saw me singing.  From my experience watching their videos on youtube, I was ready for them to talk between songs and build rapport but because the set was being broadcast live and they only had an hour, I think they had to cut that out.  They still talked a bit but not as much as I had seen. 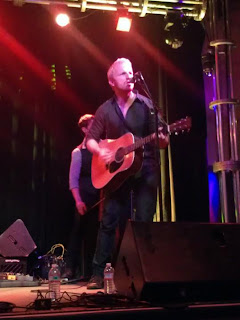 A friend asked me if they sounded as good live as they did on the CD and I told her that they were even better because you got nuances that just don't come across on a recording.  You could hear breath sounds and inflections that weren't necessarily apparent when the tracks are mastered.   They also played two previously unreleased tracks, "Cold Day" and "What You Thinkin Bout, Baby" which were just incredible.  Both of these tracks, like all of the other songs, have the ability to tap into your emotions and just hit you right in the feels.  The cover of "The Chain" is the absolute best version of that song next to the original and no one should ever sing it aside from Delta Rae and Fleetwood Mac.  "Bottom of the River" is the gateway drug that gets everyone hooked on them but if you want to hear Brittany explode...you need to hear her wail on "Fire".  That song should come with a warning label because it will knock you out.  My most favorite Delta Rae song is "Chain on Love" because of the message it holds and what it means to me and my life.  It makes me swell with pride to know how many allies we have in the fight for what should be so trivial and I had the opportunity to thank them for writing and recording that song and got choked up talking to Ian about it because of how important of a message they are sending with it.  I think I would have been a puddle of mush if they would have done it and I nearly made it to that state with "Is There Anybody Out There" - which is a very close second for favorite song of all time.  The rest of the set was incredible and they never once missed a beat. 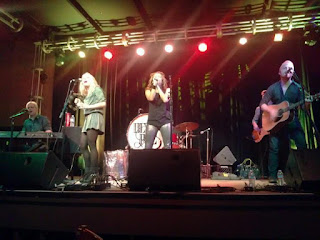 They held the audience in awe for the entirety of the set and I was sad when it had to come to an end.  What I learned about  them last night that you can't really learn from CDs or videos is just how honest and genuine they are.  Humble doesn't begin to describe them.  Each and every member of the band was so grateful and thankful for us being in the audience.  They took the time out to thank up profusely for coming out and it amazed me because I did the same to them for bringing their music to us.  We got to hang out for about an hour after the show and talked to them and I am so glad that we did.  It might be a while before I see them again but I have a feeling they'll remember me.  That type of relationship between artist and fan can't be faked and is totally organic.  They are thankful that there are people out there that want to hear what they have to say.  I told the best friend that I was wish I had so much inside of me that in order to properly express it, I had to do it through song.  I am just so in awe of anyone that can do that and when they do it was well as Delta Rae does, I consider my self lucky to be in the presence of such amazing artists.


We left with a hug from Brittany and a 'Goodbye, Wes' from Ian and I think I at least made it to the car before I just became a babbling idiot about the time we just had.  I cannot express just how much of an incredible time we had.  It's a situation that I can talk about all day long but until you're inducted into the fraternity of people that have experienced them live, you just can't fully grasp the magnitude of their message.  This experience is hands down one I will be talking about to anyone that I can make stand in one place or any given amount of time.  I am honored to be a fan of this amazing group and I am certainly one that "enjoy's their song".

Photo Credits: Charles Cornett II
Delta Rae Set List provided by Ashley Mizell of the Unofficial Delta Rae Street Team (as my phone was dead and my waitress had stolen her ink pen back)
at October 08, 2012