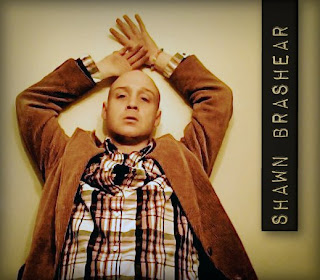 In my experience, local unsigned music is hit or miss (unfortunately on the miss side more times than not); however, when you find an artist - and I mean an artist, it is important that you support them and help raise them up anyway you can. Last night, I was taken to the locally owned coffee shop, The Creme, to hear a friend of a friend play. Normally this is not my scene and I shouldn't be bothered but I decided to go. What I experienced was well worth my trip and I can't thank my friends enough.

Shawn Brashear is something of amazement to me because he has a sound that is not only bigger than this town but it is bigger than himself. I am always enamored with people that have so much inside of them that the only thing they can do is express it in an artistic manner either via song or painting or some outlet that gives a means of expression. I think that with Shawn, you have just that. You have someone that has something that needs to be said and he does just that and moreover there are people that need to hear what he has to say. So getting to his music. The show I attended was just him, his guitar and an intimate group of 30 or so of his closest friends. It is a mix of original work and covers that is thoughtful and measured.

During his set, he bears a little of who his is a song at a time until by the end, you feel like you've been hanging out with a friend for an hour or so. The music would be classified as Indie Rock and possibly could be set on the shelf between Radiohead, David Gray and Damien Rice. If you are a fan of singer/songwriters or if you are a fan of music in general then I can't recommend him enough.

His vocals have a raw edginess to them that bring more depth to the tracks than I think other vocalists could do. They also are more honest and help to bring you in closer and build a rapport with him.

He has a self released demo that I managed to snag a copy of last night and I have been spending a great deal of time with it today. If you want to hear the demo, you can go to his Facebook page and listen to the tracks there. In a small Midwestern town, we are honored to have someone of his talent and magnitude here. I, for one, and gracious and grateful enough to be able to say I knew him when. I want to write a track by track but I think I need to wait and come back when I've lived with the demo for a minute or two.