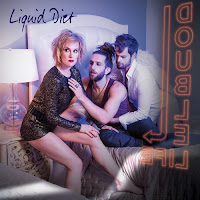 When you make the decision to do the thing that's right for you and you neither require nor desire someone else's approval is when life fully starts. That's what Liquid Diet has done with their debut LP, they made the record they wanted to make and they did it in the manner in which they needed to. This album is unapologetic. It's raw. It's what we all should strive to be. It's irreverent and it's going to make an impression. It's brutal and it's all the things that make for an outstanding album. It's brash and unforgiving. But above all that, it's a really well put together album. If the construction of the tracks and the overall flow of the album fell apart, then none of the "no fucks given" attitude would work but thanks to top notch production and near flawless execution of the ideas they set out to express, the album stands as a shining example of what you can do if you do it well.

I think that we need more of this in our life. We need to hear music that shocks us a little. We need to be jarred out of our slumps and we need to be challenged. With out discord and minor amounts of chaos, we will stagnate and there will be no opportunity for growth. I know this analogy is going to go way out in left field but I honestly equate the three members of this group with the Fae from Shakespeare's 'A Midsummer Night's Dream'. Jonathan and Georgia are lording over their domain as Titania and Oberon while Billy runs around spreading mischief as Puck. And in the end, we are all more appreciative and grateful for their efforts to make us see what it is we need to see.

'Double Life' is an album that at first glance appears to be a simple dance/pop album but upon further inspection, it's far more than that. From the way the tracks are ordered to the content of the album to the choices they make in inflection and vocal delivery. Will this album change your life, maybe.... will this album make you stop and think about life and how certain intricacies of your daily interactions with yourself and those around you, hopefully. It's not just an Dance album. It's not just an Ambient album. It's all of the above and it's going to take you to high places and keep you spinning there and then it's going to bring you back down into a chill meditative state with one of the more trance like songs. It's sexy and it's sultry and it's dirty and raunchy and it's unapologetic about all of it. They pull no punches and it works very well in their favor. It's not gimmicky and it's not something that has shock value to just have shock value. There is a fine line between an album you can listen to and take seriously versus a comedy album.

"My Cunt" is one of the more provocative songs on the album but when you listen to the lyrics and actually hear what they are saying, it's a song that speaks mountains of truth. Why waste time getting a record deal and all the headache that comes along with it when you can get your music directly to the people that want to hear it? If that means fucking a DJ, then where is the harm? Everyone gets what they want and as long as the communication is clear then no harm, no foul. It's not a song that's meant to just be there for shock value. It's a song that has a lot to say about the music industry.

The album is laid out so incredibly well. You've got tracks like "Don't You Wanna Know" and "Inside Me" preceding "Writing on the Wall" and they act like foreplay to get you ready for the next track. "Don't You Wanna Know" is a deceptive single in that if you listen to the lyrics as they're looped and sampled, it appears to be a song that is helping people explore their lives outside of the mundane. It's a song that is going to challenge people's beliefs. How do you know whether or not you like it until you try and you're going to try it in an environment that is safe and without judgment. Step out and find out.... you know you want to.

"Rise" is a very important song that we should become part of our daily mantras. "Best friends aren't always forever"..... that lyric hit me like a ton of bricks and I was like.... You don't know my life, but that's what musicians do. They tell our stories in a way that we can access them and make them part of who we are. Sometimes you have to cut the negativity out and rise above it. It's a hard lesson to learn but in the end sometimes we have to. We have to look at our lives and make the determination that we are going to do better for ourselves. We aren't going to be trapped in the same mess that we have been.

"Looking For Love" is should be a seminal track for anyone that's had their share "chance" encounters. We get in, we get what we need and we get out. It's just a thing. Maybe we try our best to find something more but for what it is, it gives us what we need. And the homage to The Doors is amazingly brilliant. Exceptional choice for this song.

I love the ups and downs in the album. The moments of quiet introspection like "Miami" and "Rearview Mirror". They let you just float along languidly as you let the album take you where you need to go.  But then you are lead to an amazing example of Georgia's beautiful voice on "I Love You All". She does have one of the most amazing voices in music today. It has so much character and can be this raucous party in your ears or something small and demure. Her range and control is incredible.

"Dumb and Hung" makes me exquisitely happy because it, like "My Cunt", doesn't care. It's totally straightforward and doesn't mince words. It's an example of what we can do if we just do away with all the pretense and all the games. Speak plainly and clearly. Enunciate your wants and desires. Don't beat around the bush. Put it out there and you'll get what you need.

The album closes with "Luminary". It's a gorgeous song that is a lyrical journey all on it's own. You should watch the video to see just how amazing this song and the visuals they have created for the song are. And by the way.... you can grab yourself a free download of "Luminary" by clicking here.

The album makes you ask questions about Liquid Diet as a trio. What is this Double Life they've been talking about? Are you experiencing your own version of it? Do you want to watch and see if they are leading their own version of it? It makes you question your morals and desires and leaves you wanting more. Dripping with sweat and satisfaction; Georgia, Billy and Jonathan leave you satisfied and satiated. Doesn't matter what it was you were looking for at the beginning of the album - by the time you completed it, you know more about yourself than when the journey started. Maybe you've opened yourself up to possibilities you never thought you would? Maybe you want to experience things for yourself. Isn't that what music should do? It should challenge you. It should make you want something more...

Get the album on iTunes or Amazon and support this amazing group.
at September 13, 2016