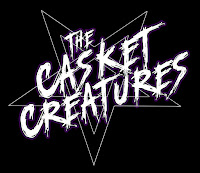 Gonna take a pretty huge detour from the music I normally feature but its my site and it's my prerogative so whatever. While I was in Atlanta over Labor Day for DragonCon, I got to meet Ryan Cadaver, the lead singer of The Casket Creatures; a horror rock/punk band based out of Atlanta. Now, as a child of the 80s, there's really not one of us out there that isn't influenced by horror movies of some form; whether it be "Nightmare on Elm Street", "Friday the 13th", "Halloween", "Critters", "Ghoulies", "C.H.U.D" or anything by Troma. Throw in the potential that if you're reading this blog, you may have a bit of nerd in you and you know what I say is true so honestly - talking about a horror themed metal group isn't too far out of the scope of what I do. Plus, it's my blog so I can pretty much write about whatever the fuck I wanna write about.

We talk about music and what music represents. We talk about how music influences is and how music makes us feel. Yeah, we are a feeling blog around here because I'm not educated enough about chord progression or how songs are constructed to get all technical with my write ups and it's fair to say that all emotions are valid around here. We've talked about melancholy and the gloomy stuff. We've jumped headfirst into the super poppy and bubblegummy stuff so why not the darker stuff that some of us deal with in our lives. The stuff that you know you want to talk about outloud but you're afraid because it may alienate you from your people. But if you're familiar with music that makes you feel things and you're familiar with Limp Bizkit's song "Break Stuff", you may or may not have belted out a lyric or two when the day isn't going your way. And that's totally acceptable. It's absolutely fine to be affected by music. It's what we want it to do. We want it to connect us with something that is larger than ourselves and have it express the things we don't necessarily have the words to express on our own.

So a song taps into your darker emotions, your more base, primal need. Go with it. See where it takes you. I think that's what "Deranged" by The Casket Creatures does. Combined with the visuals from the video, it taps into a part of us that we may not necessarily acknowledge on a conscious level. It's the deep, dark that may scare us if we are ready to open up to it. It's the stuff that goes bump in the night and all those other clichés. But what it is, is a catharsis for those emotions and feelings we may be having.  I've been told that there is a story buried in the narrative of the video and from what I see and what feelings it helps me to unlock - it's a story about loss and how we feel after a dissolution of a relationship. Not necessarily a romantic relationship, just one that we held close to us. The confusion and the feeling all knotted up after we've been surreptitiously dumped by a lover, a friend, a whatever they are.

You've got a video in which the members of the band act out scenarios of gore and death on a bevy of beauties. I don't see any misogyny in this video as I am going to assume that the members of the band identify as heterosexual so it would make sense that the objects of their affection would be that of the opposite sex. As well as the majority of their fan base would key into these visuals as well but fear not, dear reader, because the tide shifts at the end of the video. You've got these emotions that you need an outlet for and what better way to process those than through a video like this. No one is harmed and you are left with a feeling of closure.  Yeah, the video is what it is. It's a horror movie in less than 5 minutes. But it is more than that; if you need it to be.  The guys in the band are really badass dudes and they have other videos in their repertoire that are not as graphic as this one so if you're into the melodic metal that they do so well under the guise of horror rock, I say check them out. You don't be disappointed. Also, if you're a fan of The Misfits, The Melvins, The Dead Kennedys then I highly recommend "The Curse of the Mummy's Tomb", "Zombie Werewolves from Outer Space", and "Blood Junkies".

Email ThisBlogThis!Share to TwitterShare to FacebookShare to Pinterest
Labels: The Casket Creatures