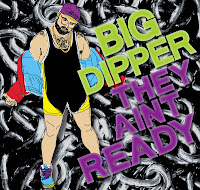 Here's the deal.  We are all different in our own ways and we are all valid for what we contribute to the universe.  There was an episode of Queer as Folk where Peter Paige's character Emmett Honeycutt became a contributor on the local news, a la Queer Eye and controversy broke out when he became sexualized and the moral to the episode or what they were trying to prove is that at that time, the world wasn't ready for a fully realized sexual gay guy on the local news.  So Emmett quit the show in fantastic fashion proving that they couldn't force him to be a eunuch.  I think that is still an issue in today's society, it's great to have gay characters on television and in movies but the heterosexual masses don't want to or can't deal with the backlash of the idea of gay sex.  It's still fine to have style contributors or sassy gay neighbors but what happens when those gays start actually talking shop?

That's something that Big Dipper isn't going to shy away from.  He's pulling no punches.  He's not censoring himself for anyone.  I'll be honest, there are times when I listen to him where I have the same reaction I did when I heard Lil Kim talking about sucking dick.  I've actually looked around to see if anyone heard what he just said and then I just say fuck it and crank it up.  But what he's not is a one note sex stereotype.  He is an actual emcee with  real lyrical timing and skills.  Anyone can say a rhyme but you actually have to have it in you in order to spit that rhyme and make it stick.  He does just that.  If listening to gay sex against a throbbing club beat, then he may not be your cut of tea and make no mistake, he isn't trying to be something he's not.


A gay, Jewish bear cub from the Chicago area he is blowing up expectations in the mostly straight arena of hip hop.  Listen to his lyrics, hear the rhymes build and cross over and come back better than a lot of emcees in the game.  He has talent and he has control.  He will break down barriers and do more good than artists like Frank Ocean.  I love Frank Ocean and think he's an incredibly courageous man for coming out but artists that are in the trenches like Kendall Kelly, Cazwell, Elephant, Yo-Majesty and Big Dipper are going to do more good in the gay community.

So his EP, They Ain't Ready, is it any good?  It's damn good.  The songs are strong, his raps are tight and the production doesn't sound like it was done in a basement studio.  Listen once for the overall feel of the songs but then you need to go back and actually pay attention to his flow and his style and how he pieces things together.  All the tracks are great, I don't want to say one is better than another because what he does he does well.  Yeah the songs are dirty but who cares, he's a trail blazer.  Plain and simple. And did I say it was free?  Yeah, it's a free download from his site.

Big Dipper on the Web