Matt Zarley - Change Begins With Me 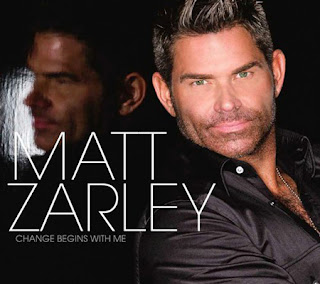 Every so often, there is an artist that has a sound that just wraps you up in comfort and warmth that you feel like you've known each other for years. Matt Zarley is one of those artists. I stumbled across him when I found his video for Had I Known on Youtube after my boyfriend of 11 years passed away. The first time I watched the video, I felt as if I had been hit by a truck because the lyrics resonated so deep with me. The song is directed more toward someone during a break up but it parallels the feelings I had after Sean passed away. The song is about the regrets of not knowing that things were going to come to an end and if he had known, things would have been done very differently. That regret and guilt was so overwhelming to me because I didn't know that he was going to pass away and I didn't know that I wouldn't have time for "a real goodbye". So after I picked myself up off the floor and process what I had just listened to, I proceeded to track down all the information and music from Matt that I could. I went back and bought his entire library and immersed myself in his music.

His new release, Change Begins with Me, is an album that will speak to every part of you. The cheated on part, the broken up part, the resilient part, the new love part, the grateful part. There is something honest and good about his music. The first single to be released was WTF which is an absolute fun ride of a song that takes a subject that is pretty serious in the form of infidelity and gives it a danceable beat.  The video for the single is big and splash and full of beautiful men that make you tap your toe and root for Matt as his new beau gets his comeuppance.  The album is put together so well and the songs and their placement in the line up are so thoughtfully arranged.  If you are having a bad day, there is a song that is there for you.  If you are having an awesome day and want to express how you feel about that person in your life, there's a song for that.  It's been a long time since I could put an album on that from start to finish, touches every part of me.

Matt has announced the next two singles as Perfect and Trust Me.  Perfect is and incredible ballad that expresses a feeling that most of us have probably had.  Even though you may not think so but there is someone out there that thinks you are perfect in every way.  Trust Me is a super sexy, sultry song about trying something new and letting your guard down with your significant other.  I can't wait to see both videos because they are going to be spectacular.

The album is so worth it and I am so glad that I took the opportunity to bring it into my life.  Matt Zarley has a beautiful heart and he has an uncanny knack for expressing feelings and emotions that we've all had at one point in time or another.  This isn't just a pop album it's a statement of caring and love and you can feel everything that has been put in to it as Matt has laid his soul bare for all to see.  Take the opportunity and pick up this album.  You won't regret it.
at September 10, 2011