I got a present!! 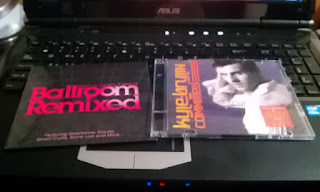 I started writing this last night but was just exhausted so I had to finish this morning.  I checked the mail yesterday and to my delight I found a mass media envelope all the way from New York, New York. Inside the envelope were the above CDs which I was super thrilled to get. A songwriter friend of mine sent them to me to take a bit and give them a listen. And to be able to type that a songwriter friend makes me pretty impressed with myself and where my career as a blogger is leading me to. Because I was already familar with Kyle's track, I immediately put in Ballroom Remixed because I have been a huge fan of Melanie LaPatin ever since I first saw her first number way back in Season 4 where she and Tony Meredith choreographed Courtney Galiano & Gev Manoukian to Wishing on a Star by Rose Royce.

This album was put out as a challenge to a set of producers (Ricardo Autobahn & Richard Hymas) to take modern dance type tracks and give them a ballroom spin. The artists range from the amazing Gravitonas to the so beautiful Elousie and super robot boy, Simon Curtis. Being a gigantic Simon Curtis fan, I was immediately drawn to this track and was not let down in the least. Simon's voice and musicality never let you down and there is something so organic about the mechanical feeling behind his music that draws you in without you ever knowing it happened.  Kyle Brylin's track, I'm a Man (Not a Piece of Meat) is a totally awesome song and if I could do a cha cha, I would be all about it.  Nick James over at Alien Hits introduced me to Gravitonas a while back and I am becoming more of a fan with each track and this one (Fun and Games) is no exception.  Other notable tracks are New Star by Neo, Body Heat by Linda Teodosiu.  I am not super familiar with all the artists but I think that's one of the most exciting parts of a project like this because not only are you showcasing new talent, but you are exposing the public to artists they have never heard before.  I am totally going to keep track of most of these people because there is always room for more awesome music in my life and because these CDs were sent to me by a songwriter, I've actually paid attention to the lyrics instead of just getting swept up in the movement of the rhythm and I can say that I am in awe of people that can put pen to paper and for 2.5 to 6 minutes tell a story or express emotion like no other.

The CD is just full of fun dance tracks that will have you tapping your foot and bobbing your head before you realize it and I believe the Melanie has come up with a total win with the challenge she laid out before the production team.  I think that this is one that is gonna go into heavier rotation in my playlists to help pick me up.

Kyle Brylin's Committed maxi-single is pretty brilliant as well.  The mixes are awesome and they all have such a varied sound and formula that make it sound like a different track.  I am new to Kyle but I dig what he has to say.  I think my favorite mix is Chameleon Musique Extended Remix because I dig the bass line and how it starts out low to begin with.  So many songs have huge build ups, which I am a fan of, and then they drop it.  I like how this track already starts low and sort of flips the script and comes at you from a different angle.
at September 07, 2011