Today marks the release of Jay's new album.  If you don't know who Jay Brannan is, you need to stop reading right now and watch the video below.  I'll wait for you because it's super important to do this.


Ok, now thats out of the way let's continue.  Rob Me Blind is the 3rd studio album he's released, the first two being goddamned and In Living Color (an album of covers).  If you are in need of stripped down, easy music then Jay is certainly for you.  The production of his tracks are not overworked, they are generally him and his guitar and a few more instruments to fill out the sound and make it a bit fuller but it's simple and clean without and overly flashy tricks.  He's been compared to artists such as Ani Difranco and Lisa Loeb but I think that does a disservice to his art.  He is honest and clever in his delivery with no pretense or condescension.  His lyrical content is intelligent and never ceases to amaze me with the images he is able to paint with his words. 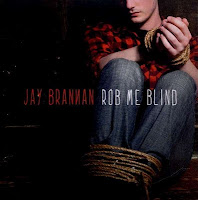 Rob Me Blind is no different in quality than his previously releases.  It's a 10 track album that is full of surprises like "Denmark", "The Spanglish Song", "Myth of Happiness"... hell, what am I talking about.  There are no bad songs on the whole album.  It's another outstanding creation from an amazing artist and I for one am super thankful that he is creating art.  It's an album that you can put on and listen from start to finish and not once want to skip a track.  The storytelling is brilliantly executed and the emotions and heartfelt sentiment he can help to invoke are inspired.  Even if you are new to Jay as an artist, this album is an amazing starting place or the best step in his career that certainly takes you where you need to go.

One of the things I love about how connected Jay is with his fan base is he is always releasing tracks on his youtube channel and he tweets about them so he is one of my favorite tech realized artists.  When he does sit down to craft a video for a song that isn't just him and his guitar on a web cam, you get amazing pieces like "Can't Have it All" (above) or "Beatutifully" (below); which is the second single off this album but if you had In Living Color you would recognize it as one of the two original songs released on that album.  The video is does a fantastic job of giving a face to the haunting words of the track.  Go ahead, watch it too... I'll be right here waiting.


Subscribe to him on youtube, follow him on Facebook and Twitter because he is very interactive with his fans.  I remember when Google+ first came out, he would do Hangouts with fans and even broke into song so it was like a super intimate concert between him and 7 of his friends.  Buy the album.  Don't be a dick and steal it because he is publishing them on his own record label so there isn't some big corporation taking a huge cut.  You are stealing money right out of his pocket and if he can't afford to tour and promote the album, then he can't make more art and we all want him making more music.