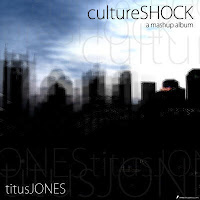 I don't do full album reviews because most of the time, it can come across like I'm pandering or attempting to kiss the artists ass. What I can say for certainty about Titus Jones and this album is that I think he can do for pop music mashups what Girl Talk has done for hip hop mashups. I've talked about them before and I have given my opinion about mashups but if you missed it, here it is:

A good mashup is an art form.  Anyone can take 2 songs and smash them together. There are databases of BPMs and software that will change tempos and remove vocals and strip beats out but when you are dealing with an artist, a true artist, that can conceptualize how to take 2 or more songs and layer them together so that they flow and fit flawlessly, then you have elevated the project to art. And the world is desperately in need of more art.


Much like what Greg Gillis is doing with hip hop and rap, I feel that Titus is doing for pop music. Don't get me wrong, they both cross over into very similar territory but both DJs know where their bread is buttered. Titus loves him some females. From Pink to the Gaga Monster to Britters. And he knows how to take them and skillfully combine them into one supergroup with no horrible backlash from the public. Now, I've pumped his ego as much as I can without getting all super creepy so I'll leave by saying, you need this album in your life. You need to get swept up by Nicki Minaj in the intro and you need to marvel at how Muse and MGMT and Kings of Leon all share the stage with Britney and Foreginer and Carrie Underwood and Rhianna. You will hear amazing things when Dolly Parton makes a cameo alongside Taio Cruz and Fountains of Wayne.

From start to finish, this album is definitely worth your time. You need to download it and listen to the ease at which he is able to take you through his process and have strong feelings about these songs again. Once you form a relationship with his music, you need to find him on twitter and facebook and soundcloud and youtube and be his friend.

One of my most favorite quotes I've ever heard regarding pop music said, Music is music and it shouldn't matter as long as it gets you where you need to go. Culture Shock by Titus Jones takes you places you never knew you needed to go and makes you happy that you went.

Absolute treat of the album: PokeStar! I wasn't expecting this and it was so awesome and made me smile from ear to ear. Rhianna reminds me of a pokemon and I want to catch her in a pokeball now.

Oh! and B T Dubs.....as far as it being worth your time, it's FREE so go download it and enjoy. Then pay attention to when and if he is coming to your town and go see him spin. Buy merch from his merch table and support art where you can.