I've lately been inundated with dream pop and indie pop and while it's all amazing work, there gets to a point where you're searching through every whisper in a song to try to distinguish it from the next amazing artist that deserves your time and energy as much as the one before. So it's really quite awesome when you get something that doesn't fit into those same categories. I would still classify Hana Brooks as an indie singer/songwriter but there's more rock in her veins than just pop. You know that one of the things that immediately makes me take notice of an artist is their voice. If there's a quality to their voice that makes them stand apart from other artists, I will gravitate toward that. Hana Brooks has just a bit of a raspy voice in the same vein of a Vicci Martinez or Melissa Etheridge and it's gorgeous. It's earthy and it's full bodied. It is expressive and it's full of emotion. There's a longing and a hope in her voice at the prospect of "dancing with someone new" and it resonates with us as listeners because we've experienced that feeling. 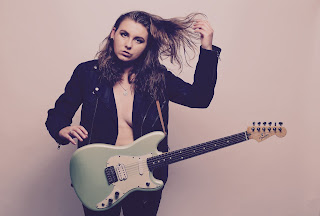 I love the overall upbeat, rock vibe and after working with a producer like Nick Bennett, who has worked with another one of my favorite females with an incredible voice; Hannah Reid of London Grammar, it stands to reason why she's been making a name for herself around London. She's even been featured by Huw Stephens and has been touring with Sofar Sounds around the UK. I like the cleanliness of the live production of this song. It doesn't sound like there's been any, if all, post production work. It all sounds like what she's created and what she's putting out there for us to hear. There is so much passion in what she's doing. You can watch her face as she's singing the chorus and see just how much she's putting out there. It doesn't just come across in her music but in her performance as well. I think she's got the potential to be an amazingly successful recording artist and if she is paired with producers and creative types that foster that grounded, earthy sound she's got; she will easily stand apart from so many of the other artists that are releasing music right now. Make sure you check out this track and follow her on her socials. She's going to be big. I can feel it.