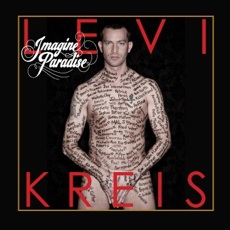 It's easy to see how the summer of 2013 is shaping up to be a funky one.  With releases like Slow Knights, Cosmos and more recently "Human Man" by Johnny Stimson and Daft Punk's new album, there is more than enough groove to go around, well you would think that until you Imagine Paradise. And if this LP is what Paradise is going to sound like then I am down for it.  2 years ago Levi Kreis set out to make his new album on his own terms and by his own rules with no one telling him what to do.  He created a Kickstarter and his fan base came running to his call and helped him crush his goal.  I've talked about it Here.  It's my number 2 musical happening of 2011 and it was an incredible accomplishment for a boy from the mountains of East Tennessee.


After he exceeded his funding goal, he started writing the album and though some small and not so small bumps in the road, he created one of the most fully realized albums I think I have ever had the opportunity of listening to.  It's a 12 track album and each of the tracks are dedicated to a different backer from the Kickstarter campaign.

I've struggled to find the words for this review because I want to make sure what I say truly represents how his work has touched me and how much this album means to me.  That being said, I hope that I have done it justice.

Right off of the bat, Levi busts out a slow jam that is destined to be the next huge love song in Season 5 of The Vampire Diaries.  lol.  "We Are Timeless" is this crazy amazing track that makes me immediately get on the dance floor and slow dance the shit out of it.  I'm talking being so close that you only have one breathing pattern, where your heart beats at the same time.  That slow swaying back and forth that is just effortless and easy.  When I get gay married, it's the song that is going to be my song.

Moving from there we are treated to the beginning of the funk.  "Any Way You Want It" comes right in and tells all haters to "get ta steppin".  It's a super positive affirmation to living your life and being yourself.  The thing that we all get too wrapped up in worrying about.

"Taking Back My Boogie" keeps the vibe going as he burns through another positive jam about owning your business and representing your own brand.  You've sat around long enough and you're tired of waiting. There are a million other boys out there and if you don't see a good thing when it's right in front of you....someone else will.  Empowerment never sounded so delicious.

Another amazing love song comes in the form of "All Over Again" and this one just makes you smile.  It's that feeling that you know in the bottom of your gut when you see the person that makes everything right in the world.  You know this is the person you're going to spend the rest of your life with and every time you see them, it's like that moment in your mind when you just knew.

I have talked about how Levi has this intrinsic ability to "take you to church".  He does that on this album but it's done in a different way than he has done in the past.  With the a groove running through this album that would make Teddy Riley and Babyface jealous; Levi easily moves from sensual to deep shoulder action without trying.  "Deeper Love" is one of the drop into the groove and just get with it and when Levi scats at the end, the deal is sealed.  This man can do anything.

One of the mostly heavily disco influenced songs on the album, "Love Revolution" was conceived in the bathroom of Studio 54 in a different lifetime.  I see glamour and glitz and all the trappings that go with it.  QBoy's rap at the end takes this song to a whole new level.  It is another song in the amazing feel good column.

He does this amazing thing on the album where he juxtaposes this kind of heavy source material with a beat that sort of takes the edge off of it and you give into the overall experience the first couple times around then when you actually listen to the lyrics, you're like, "Oh....damn" and that's kind of what he does on "4 Letter Word".  It's this song about questioning where you stand but unless you actually take the time to hear it, you would miss it.

"So Much Better" was the first single off the album and I've gushed and gushed about the song until I felt like I'm blue in the face.  It's an amazing song and it's fully realized and I think it could easily be played a a Pride festival or on mainstream radio.  I love this song.  Love it to pieces.

"Never Will I" makes me think of Jimmy Jam and Terry Lewis and that whole Janet Jackson Velvet Rope type of sound.  (For the record, that's one of my most favorite albums of all time).  This is a quintessential Levi song that just makes you feel good about yourself.  This is one of my favorite songs on the album.  Hands down.

Following in the steps of legendary duets sung by Barbara Streisand and Donna Summer or Lionel and Diana - Levi and Sam Harris tear it up on "It Ain't Over".  This is just a damn fun party song that makes me want to strap on my skates and hit the rink.  I love how their voices just come together perfectly to compliment each other.

And he steps into the pulpit and the sermon begins.  This is where you just sit back and let the joy that is the work Levi does wash over you.  It's deep and meaningful and it's full of passion and heart and soul.  "What Love Is" may be the shortest song on the album but it is by far not the least meaningful.

And we close the album with my favorite track.  This song hits me right in my heart.  This track was released acoustically on his "Live at Joe's Pub" album and that version of the song, with just him and the piano is haunting and beautiful with with a full production behind the song, it breathes a new form of life into it.  "Let It Go" is this song that just sits heavy with you long after you've listened to it.  It's a moving on song.  It's a powerful track that makes me weak if I'm in the right frame of mind because there are times when I just can't...Let It Go.

This man is the epitome of grace and graciousness.  He has an instrument blessed by God and he has used it to make this world a better place.  He makes me want to be a better person.  I want to be the person that he sees in me through his lyrics and his melodies.  I am so grateful to have him as part of my life and he has so much to give the world it's not funny.  If you haven't purchased Imagine Paradise you need to.  It will take your darkest days and make them brighter.