Hayden Chance - Anatomy of a Wish

I know this has been primarily a music blog for a long time, but as I said a couple posts ago; it's now going to be about things that inspire me and nothing has inspired me more lately than the writing of independent author, Hayden Chance.  Hayden is a Chicago native and has surrounded himself with words his whole adult life.  Not finding the books he wanted to read on his local bookstore shelves, he decided to write them himself.  Here is the review I published on several book sites about his latest book, "Anatomy of a Wish" 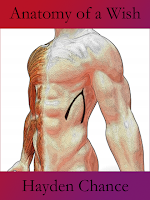 There are too many authors in the world that write with far too much pretense. Hayden Chance isn't one of those people. What he set out to do in the beginning of this book is fully realized by the end. I picked up this book on a whim and I simply could not put it down. From the time I started it to the time I turned the last page, there was no where else I wanted to be. It's been a very long time since I had an author instill such a hunger in me (pun intended). He writes with a voice that is familiar and easy. You feel like you've known his characters and as an extension, Hayden himself for a very long time. These are people that you've encountered and you like them. You get to know and care about his characters quickly. I think if I had to pick a criticism, the book wasn't long enough. I didn't get to spend enough time with them. And that says to me there needs to be a sequel or four. I couldn't believe how quickly I fell for these people. There is an "a-ha" moment in the book and it actually made my heart soar when I read it. That's a quality that I also haven't felt in a long time. I lost all track of time as I was drawn into his part of Chicago.

I don't want to do a synopsis of the book, there are plenty of those out there. What I do want to say is this a story that I didn't expect to go where it went. There were honest to goodness twists and turns I did not expect and not once did I ever feel the ideas behind the writing were overworked or gratuitous. It's almost like every word put to paper was done because it needed to be there. It was deliberate but had a beautiful sense of ease to it. I gush because I am left with an amazing feeling after completing this book. And for that, I am grateful.

I found Hayden by chance on Facebook and started looking into his works and decided, what the hell. And I am damn glad that I did. I went ahead and bought Year of the Bull as a follow up because he has quickly found a place in my favorite author category. I am recommending and gifting Anatomy of a Wish to all of my friends who are readers because they will devour this book. I think if the rest of his works are as amazing as this one, Mr. Chase has cemented a place in my library as long as he continues to write.
If you're a fan of a little fantasy with your fiction, then don't miss out on this terrific book. There is so much I want to say about this but it's your turn now. Pick up the book and spend not near enough time with Griff, Jimmy, Reina and Hector. You'll be glad you did because it's worth it.
at November 07, 2013